I hope you are all well and ready for another new and exciting day?

May the Lord be with you.

We are Bishop Ridley.

Learning and growing together

Sharing the love of God.

Lets start by singing an up lifting song.

"This Little Light Of Mine"

This Little Light Of Mine from the DVD "Let It Shine!" Buy our DVD's at http://www.listenerkids.com Check out more videos: The B-I-B-L-E Yes Thats The Book F...

Robert Raikes and How We Got Sunday School 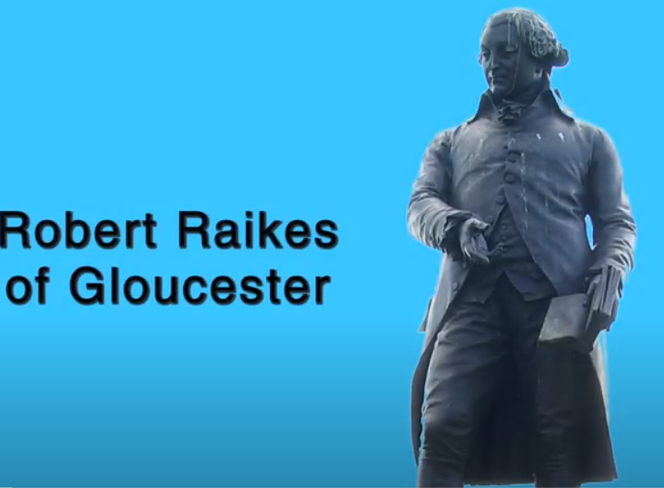 Robert knelt beside his father's grave after the funeral. Where would he go now? What would he do with his life? He'd always worked beside his father in the printing shop. But now those days were gone forever.

He mopped his teary face with a handkerchief and stood to his feet. Leaving the graveyard, Robert walked toward the printing shop that now belonged to him. He and his father had spent the last several years there, working on Gloucester, England's newspaper, the Gloucester Journal.

Robert opened the creaky front door of the shop and slowly walked inside. The familiar smell of ink and machinery greeted him. Robert picked up the last copy of the Gloucester Journal published by his father that year, in 1757. "I'll make you proud, Father," he said aloud. "With God's help, I'll keep your Gloucester Journal alive."

The days passed and Robert worked hard. He made the newspaper larger, improved its layout, and hired new writers. Soon even more people wanted to read the Gloucester Journal!

On his days off, Robert often visited prisoners in Gloucester. There he found the castoffs of society living in the most appalling circumstances. Most of them were sick or even dying from overwork. They lived in crowded, filthy spaces with almost no food. Even children were sometimes imprisoned along with the worst criminals. Robert felt sad to see these sick and starving prisoners. But what could one person do to ease the pain of so many? He decided to write about the terrible prisons in his newspaper.

The White Slaves of England
One evening he walked down St. Catherine's Street to look for his gardener. Suddenly, he saw a group of ragged children. They looked just as poor and overworked as the prisoners he visited. A little boy in a tattered blue shirt swore as he tackled another boy half his size.

"Git your hands offa me!" the little boy yelled as the two of them wrestled on the cobblestones. Soon a crowd of children gathered around, noisily cheering.

"Hey, stop fighting!" Robert shouted at them as he pulled the two boys apart. "Go home, all of you."

As the children walked away, Robert asked the gardener's wife, "Who are these children?"

"Ah, pay no mind to them," she answered. "Everyone calls them the white slaves of England."

"They work 12 hours a day or longer in the mills and sweatshops," the woman answered. "Most of their parents are in prison or dead."

Robert cringed. He knew that if his father had died when he was little, he could have been one of these poor children. "When do they go to school?" he asked.

"School? They don't go to school. They have to work to live." she answered.

And Sundays are the worst. It's their only day off and they run around like wild animals!"

Sunday Schools Started
Robert knew that the future was grim for these children who had to work all the time with no hope of an education. Worse yet, with no one to teach them the good news of the Gospel or how to live God's way, they were likely to end up cold, sick and starving in the dreadful prisons. An idea began to form in Robert's mind which he shared with his friend, Reverend Thomas Stock.

Robert waited expectantly the first Sunday for the children to come to the new school, but only a few came.

"Marcy, why don't more of the children come to Sunday school?" he asked the little red-haired girl with freckles. Marcy looked down.

"Cuz our clothes ain't no good," she answered. "Now I understand," answered Robert. "Well, you tell your friends that all they need is a clean face and combed hair, okay, Marcy?"

Robert squatted down beside her. "I'll tell you what, Marcy, I think you're nice, too. Here's a penny for coming to class today. If you work very hard and learn your lessons, you'll get a special reward."

"Really?" asked Marcy, her sparkling eyes fixed on the candy Robert held in his hand. "I'll do my very best!"

Sunday Schools Stop Crime
It didn't take long until Robert Raikes and Reverend Thomas Stock had 100 children ages 6 to 14 attending their Sunday schools. Even though the children were taught only one day a week, their behaviour began to improve. Now they had something to look forward to after working so hard every day. The policemen of the city told Robert that the children weren't stealing and fighting like before.

The World Marches On
One Sunday, Thomas and Robert walked up the street to the Sunday school building. Thomas said, "Robert, your father would be proud of what you've done with his newspaper. He'd be proud of your Sunday schools, too, although you know--everyone is calling you 'Bobby Wild Goose and his ragged regiment.'"

Robert looked around at the hundreds of children now attending his Sunday school and his face grew quite serious. "Thomas, my father died and his father before him died. One day we will grow old and die, too. But the world won't die with us. The world marches forth on the feet of little children."

Thomas patted his friend on the back. "So it does, Robert. So it does."

Let us take some time to reflect.

This year has been very uncertain. At times, such as now, for instance, we are unable to see our friends and family members who live outside of our homes. At one point we were not aloud to attend school. How did that make you feel?

Maybe you were excited for the first week but the excitement slowly fades - how did you feel then? Why?

Can you imagine working 6 days a week, up to 12 hours each day? Why would these overworked, poverty-stricken children spend their one free day going to school?

How did you feel after you found out you were able to attend school again and everything reopened?

The new Sunday schools taught two kinds of lessons. They taught reading and writing part of the day and Bible lessons the rest of the day. Which do you think was more important for helping the children and why?

Many other adults were aware of the white slaves of England, but did nothing to help. Why do you think Robert Raikes chose to do something to help the children? What resources did Robert have that he could use to further this cause?

Before we finish our time together, I'd like you to listen to another song and reflect on how blessed you are to be in this wonderful and loving school, as well as having time to play and learn along side your friends.

We must give thanks to people like Robert Raikes who spent his time helping and supporting children who needed to be reminded that they are loved and cared for, always.

"Jesus Loves Me" With Lyrics

Buy our DVD's at http://www.listenerkids.comGet the Jesus Loves Me APP!https://itunes.apple.com/us/app/jesus-loves-me/id567302978?mt=8https://play.google.com/st...

Let us say the Lord's Prayer.

Our Father in heaven, hallowed be your name,

your kingdom come, your will be done,

on Earth as it is in heaven.

Give us today our daily bread.

Forgive us our sins as we forgive those who sin against us.

Lead us not into temptation but deliver us from evil.

For the kingdom, the power, and the glory are yours

now and for ever.

Unfortunately not the ones with chocolate chips.

Some cookies are necessary in order to make this website function correctly. These are set by default and whilst you can block or delete them by changing your browser settings, some functionality such as being able to log in to the website will not work if you do this. The necessary cookies set on this website are as follows:

Cookies that are not necessary to make the website work, but which enable additional functionality, can also be set. By default these cookies are disabled, but you can choose to enable them below: